As part of the school’s celebration of Black History Month throughout the month of October, The Willowfield English Department set special Black History Month Independent Learning. Students were given the choice from a range of tasks to complete on inspirational black figures such as Martin Luther King Jr, Sojourner Truth, Benjamin Zephaniah and Jessie Owens. The results were fantastic. 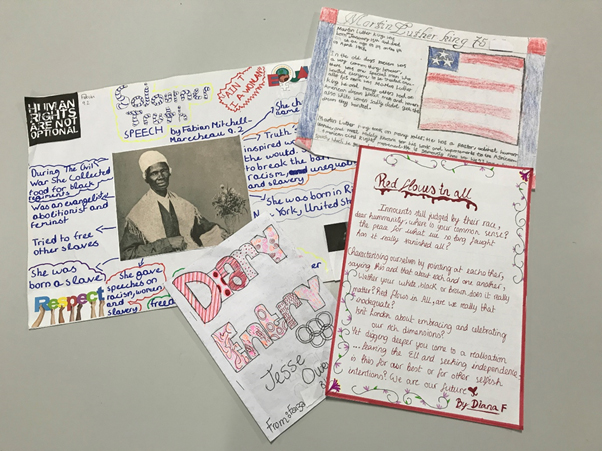 Students produced a range of different styles of work including diary entries, informative posters and poetry. The colourful contributions were judged by the English Department who chose a winner in each Year Group. The winner in Year 7 was Rammannie who produced a colourful poster on the influence of Martin Luther King. Faiza took the Year 8 prize with her Jessie Owens themed diary entry. Fabian was the winner in Year 9 with a very informative poster on Sojourner Truth, while Diana’s poem about racial equality was judged to be the stand out piece in Year 10.

Well done to all of the winners who received an anthology of creative writing.

209 Blackhorse Road, Walthamstow, London, E17 6ND
Get Directions
*
Cookie Notice: We use cookies on this site to improve your user experience.
Accept Find out more